Knowing where we come from connects us to land and culture, and empowers us to make change. In this workshop, experts help participants search online records for family documents.

In partnership with Library and Archives Canada, ALIVE, IRSSS, Our Place, and Britannia Community Services. 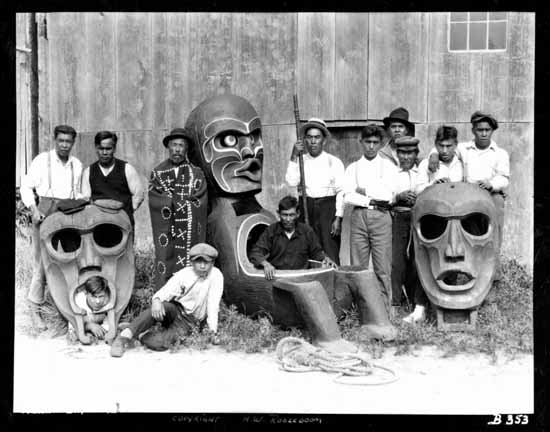 First Nations, Inuit, and Métis are collectively referred to as Indigenous people. Discovering their distinctive cultures, languages, art, and music can be a rewarding pursuit for the family historian.

Conducting genealogical research into one's Indigenous ancestry can be particularly challenging due to the difficulty of locating and interpreting records, with different sources often contradicting one another and all reflecting the perspectives of their creators. Additionally, records that contain personal information may be subject to access and privacy legislation or to restrictions placed on them by donors.

Here we will try to untangle some of those challenges and provide genealogists with tools to guide their research efforts. The focus of this page is on Indigenous peoples in British Columbia, though some information on other Indigenous groups is also provided.

Much of the content for this page was adapted from Indigenous Genealogy at Library and Archives Canada (LAC). Anyone conducting indigenous research is strongly advised to consult this resource, available in print at VPL and online. You may also wish to consult directly with Library and Archives Canada staff either in person on Level 6 of the Central Library or by phone (604-666-9699) or email (bac.referencevancouver-vancouverreference.lac@canada.ca).

Jurisdiction for status Indians has been exercised under the Indian Act through Crown-Indigenous Relations and Northern Affairs Canada and its predecessor agencies. Most information on status Indians is in the archival records of this department.

Knowing the band of an ancestor is the single most important piece of information the genealogical researcher can have. Knowledge of whether the band signed a treaty, and when, might also help narrow down a search. Most files in RG 10 fonds with information useful to genealogists are arranged by band, agency, or district.

For a list of books related to Indigenous ancestry available at the Vancouver Public Library, please see our Indigenous Ancestry booklist.

Few governmental documents were created at the tribe or nation level but were instead created at the band level. Members of bands are recognized by the government by a band number or ticket, a government-issued identification number given to a family or an adult living alone in a band.

While a band is sometimes referred to by the name recognized by its own members (e.g., Algonquins of Barriere Lake), generally the band name does not contain the name of the tribe or nation to which it belongs. Researchers should keep in mind that many bands joined together, surrendered their treaty rights or changed their names. Knowing the dates of particular interest is very important when searching for band information.

For more information about bands, including how to transfer, divide, merge, or create bands, see CIRNAC/ISC's page on Band Membership.

Place of residence might help identify the appropriate band or reserve if the name of the band is not known. Consult the following resources:

For more information on resources available at Library and Archives Canada, see their Indian Bands and Agencies web page.

The application process and forms for Indian registration vary. There are multiple application types - see Indigenous Service Canada's (ISC) page on Indian Status. Information required may include some form of acceptable personal identification, your mother and father's names, their dates of birth, and your band name and number. Some forms also require the names of grandparents.

ELIGIBILITY UNDER BILL C-31: GENDER EQUITY "All eligible grandchildren of women who lost status as a result of marrying non-Indian men are entitled to registration (Indian status) in accordance with the Indian Act."

Access to the Indian Registrar is limited to select government and band employees. Contact your band office or INAC Public Enquiries to request information. Questions regarding Indigenous genealogy (including family history searches and letters of ancestry) can be directed to aadnc.rga-gar.aandc@canada.ca or 1-844-365-9720. There is also a paper copy of the Indian Registers, 1951-1984, located at Library and Archives Canada.

Band Membership lists for all of Canada were posted in 1951 (often referred to as the "posted lists"). These lists were posted in communities to permit the protest of individuals included or excluded prior to the establishment of the first centralized Indian Register.

Descriptions of membership lists can be obtained from the Archives Search database, and file information can be obtained using keywords such as the names of bands or agencies. Many of these documents have access restrictions.

The files are arranged alphabetically by the names of bands and are described in Finding Aid 10-100. Use the Archives Search to locate descriptive information using band names and 10-100 as key words. e.g. Musqueam 10-100 retrieves the Musqueam Band - Vancouver Agency no. 15 - Membership list.

Government registration of births, marriages and deaths is usually referred to as civil registration and the records as vital records. In Canada, the responsibility for all aspects of civil registration falls to the individual provinces and territories. Availability and access vary from province to province.

AT LIBRARY AND ARCHIVES CANADA Very few registrations of vital statistics records created by federal Indian agents have found their way into the records of Aboriginal Affairs and Northern Development Canada (formerly Department of Indian Affairs). In many cases, the records have not survived or have not been transferred to Library and Archives Canada. Researchers are advised to consult church authorities and provincial government sources for this type of information.

Use the following online database to see what records may be available through Library and Archives Canada:

The only persons excluded from registration under the Births, Deaths and Marriages Act (SBC 1872, c. 26) were Chinese and Indigenous (referred to in the legislation and registered as Indians). This was changed by an amendment in 1897 (SBC 1897, c. 33, s. 3) which stated that the Act would apply to all races including all Indigenous, Chinese and Japanese. However, the Act was amended in 1899 (SBC 1899, c. 8 s. 3) to once again exclude Indigenous from provincial registration. This continued until the Act was amended again in 1916 (SBC 1916, c. 73, s. 3.2) to authorize the registration of Indigenous, which began in 1917 with Indian Agents submitting registrations monthly. (Source: BC Archives Reference Guide - Guide to Using the BC Vital Statistics "Indian" Birth, Marriage and Death Registration Microfilm)

One strategy is to search marriage registrations by the name of the community or reserve, and leave the given and surname fields blank. To reduce your results, restrict the search to a year or range of years. Searching through the microfilm of the registrations may be the only way to find some registrations. This has been made easier by filming "Indian" registration on separate reels.

Explore the topic of indigenous adoption with the following resources:

Stolen from Our Embrace: The Abduction of First Nations Children and the Restoration of Aboriginal Communities (1997)  Suzanne Fournier and Ernie Crey  970.54 F77s

For information on records from churches in Canada, please see the Church Records section of the Genealogy and Family History guide.

BC BAPTISMS An online index to baptismal records in British Columbia from 1836 to 1888 is available through the B.C. Archives' Vital Events Search. By default, the online form searches all of the event types. To search only the baptisms, you will need to deselect the births, marriages, deaths, and colonial marriages check boxes. Access to the full records is through the church named in the index.

Searching by Event Place can be a very effective way to browse the index (e.g. Lillooet).

Many entries show only a western first name and no surname.

Not all entries are for infants - some were adults, and sometimes a baptism preceded a marriage, etc.

"Residential schools for Aboriginal people in Canada date back to the 1870's. Over 130 residential schools were located across the country, and the last school closed in 1996. These government-funded, church-run schools were set up to eliminate parental involvement in the intellectual, cultural, and spiritual development of Aboriginal children" (Truth and Reconciliation Commission of Canada "About Us", paragraph 1).

Indian Residential School System in Canada This research guide from the Xwi7xwa Library at UBC is full of resources to help researchers looking for information on residential schools in Canada.

List of Indian Residential Schools in Canada (Wikipedia) Locate schools in your area of research. Once you know the name of a school, you can try to find that school on a census.

Conducting Research on Residential Schools (PDF) This guide is a tool to help researchers navigate the records of the Indian and Inuit Affairs Program, where the bulk of the records related to Residential Schools are located, in Record Group (RG) 10. It also provides a starting point for research in other parts of LAC’s collection. Finally, it provides approaches that may be applied to research into, for instance, the Indian Day Schools system, and indeed many other subjects in the area of Indigenous history.

Where Are the Children: Healing the Legacy of the Residential Schools This virtual exhibit gives a voice to the untold stories of so many Indigenous boys and girls who attended residential schools in Canada from 1831 to the 1990's.

Early "Indian censuses" found in RG 10 fonds were statistical in nature and did not identify each and every individual in the Indian population. Some were just lists of Indian heads of families.

In 1939, departmental agents began recording not just the names but also the sex, age, civil status and band number of every Indian. After 1951, the Indian register became the means of recording this information.

Not all Indian censuses created by the Department of Indian Affairs and its agents found their way into RG 10 fonds. Some did not survive; others have yet to be transferred to Library and Archives Canada.

Library and Archives Canada LAC has a number of searchable Canadian Census databases. Not all of these databases can be searched nominally (by name). Quite a few, if not all, have a keyword search field. The 1881 census index includes a field for Ethnic Origin. In all cases, enter the term "Indian" (as it was recorded historically).

Notes about searching by racial origin:

INUIT The indigenous people of Arctic Canada are the Inuit. From 1867 to 1939, the Inuit people fell outside the responsibility of the Department of Indian Affairs. Due to the fact that Section 92 (24) of the British North America Act mentions only "Indians" and no other Indigenous group, the Inuit were considered regular citizens. The Québec government sought compensation for assistance provided to Inuit living within the province, arguing that the Inuit should be a federal responsibility just as Status Indians were. The Supreme Court of Canada ruled in 1939 that, for administrative purposes, the Inuit should be considered as "Indians" and be the responsibility of the federal government. A short time after this ruling, a specific branch in the Department of Mines and Resources was mandated with the welfare of the Inuit.